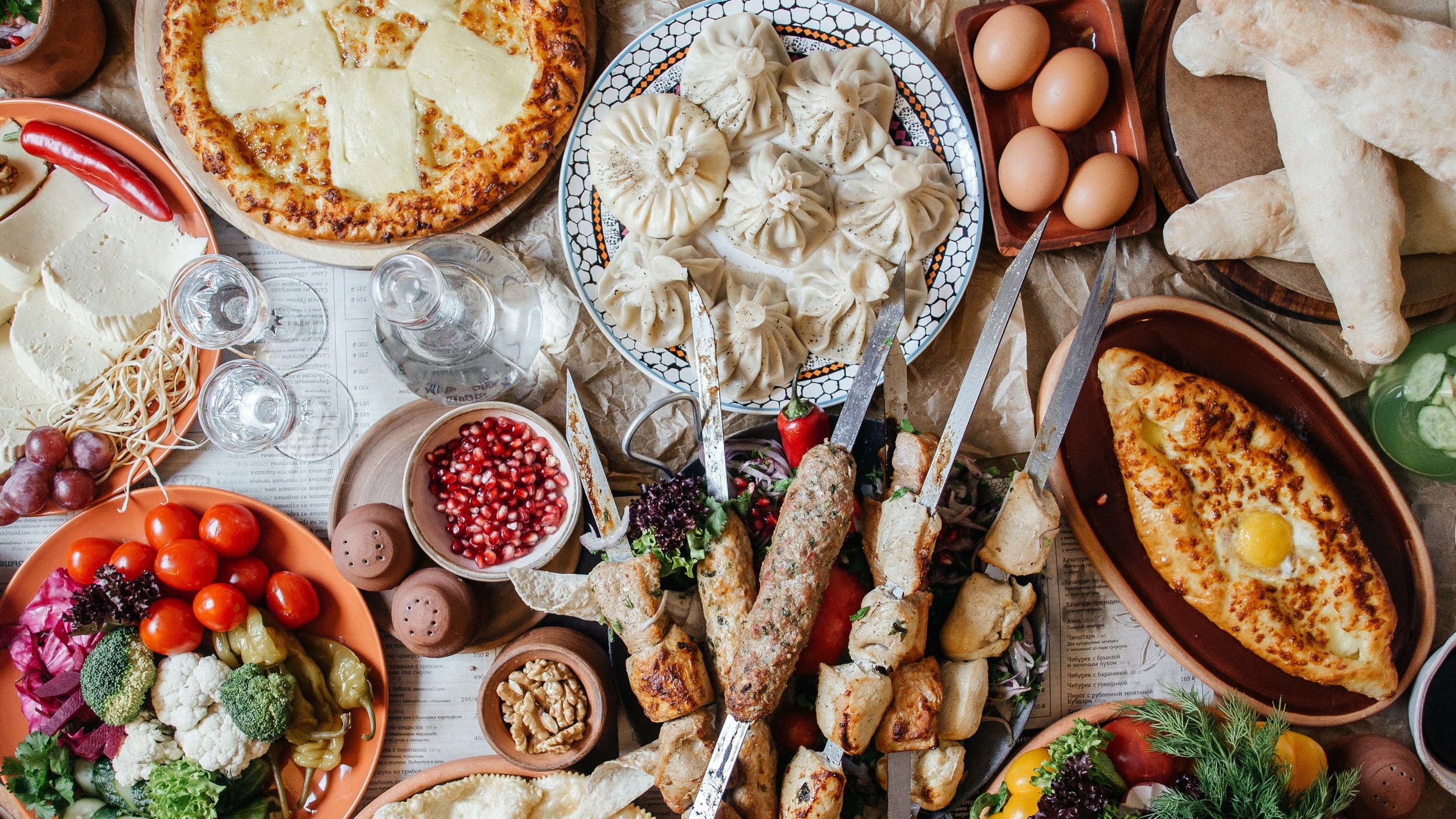 Food is a very important part of our travels, sometimes food is even the reason we travel. Try once the Georgian food and this alone, may make you to decide go and visit the country, where are cooking such delicious food.

For centuries, the Mediterranean world, Arabian and Mongolian flavors, Persian and Ottoman kitchens, the link stretching as far as Northern India have influenced Georgian cuisine. Today's Georgian cuisine is a rich interaction of Mediterranean and Middle Eastern tastes. Georgian food and wine culture is best observed through Supra, a traditional feast featuring a wide range of dishes, always accompanied by plenty of wine, lasting several hours.

The best Georgian Food you will fall in love with!

Cooked in milk and garlic Shkmeruli is a chicken dish from the village of Shkmeri, Racha region of Georgia. Chicken in a special spicy sauce with garlic and milk, often cooked on a clay pan.

Lobiani is a traditional Georgian food of bean-filled bread. In Georgia the most popular is Rachuli Lobiani, like a khachapuri, but with beans and bacon. Georgian tortillas filled with beans, traditionally eaten at Barbaroba, on the feast of St. Barbara.

Georgian dumpling, which originated in the Georgian mountain regions of Pshavi, Mtiuleti and Khevsureti. Varieties of khinkali spread from there across different parts of the Caucasus. There are several kinds of Khinkali. Typical varieties have stuffing made from cheese, mushrooms, lamb or potato, but the most common is a meaty stuffing made with pork and beef. The proper way to eat khinkali is to hold it by the handle with your fingers and then take a small bite from the top of the dumpling. Then you can blow on the broth to cool it. When it is cool enough to eat, you slurp out the broth, and then gobble the rest of the dumpling, and repeat.

Elarji is a popular dish from Samegrelo region, made from coarse cornmeal, cornflour and Sulguni cheese. Elarji is usually served with a nuts sauce Baje.

Gebzhalia is an antique dish from Samegrelo, western region of Georgia. It is made from cheese, curd cheese and mint. Usually it is consumed with Ghomi, Georgian cornmeal. It has a well-defined flavor of mint which makes the dish unique.

Georgian corn bread chvishtari (also called Chishdvaar) is a cornbread from Georgia's Svaneti region. it is also popular in Samegrelo region, but made in a slightly different way.

A thick, aromatic walnut sauce adds juiciness and unearthly flavor to this Georgian spiced chicken dish. Satsivi is a food paste in Georgian cuisine made primarily from walnuts and is used in various recipes. The term satsivi is also used as a generic name for a variety of poultry, fish and vegetable appetizers made with the satsivi sauce.

Pkhali is a popular dish that can be made with many different types of leaves, including spinach, nettles, cabbage and beetroot. It can also be made with vegetables and nuts.

Khachapuri is a traditional Georgian dish of cheese-filled bread. The bread is leavened and allowed to rise, and is shaped in various ways, usually with cheese in the middle and a crust which is ripped off and used to dip in the cheese.